You're not dense, but are your breasts? 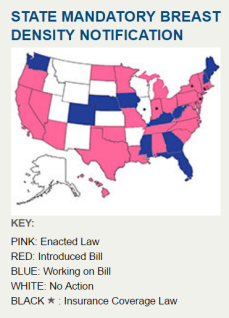 In most states in America it is now mandatory to inform a woman of her breast density. State legislation has been agreed and state laws enacted in most. In others, legislatures are currently working on bills to introduce mandatory reporting. (See map)

After her annual mammogram a woman will receive a letter telling her of her mammogram result. This letter will now also tell her if she has breast density and if so, advise her to seek further screening.

In Ireland women over 50 are offered a mammogram every 2 years. We are not told anything about breast density. Most women have no idea about the established links between breast cancer and breast density.

beingdense.com advocates for mandatory reporting of this information.

You are not dense but are your breasts?

Ask at your next mammogram.